Hello everyone, this is an Sample PPDT practice set on A BUILDING ON TOP OF STEEP ROCK . This is a part of PPDT Practice set , which may come across during your SSB Psychological TAT or on SSB Screening PPDT. I have also uploaded many sample psychological PPDT and TAT stories for your preparation earlier. Practice more and more for better practice. 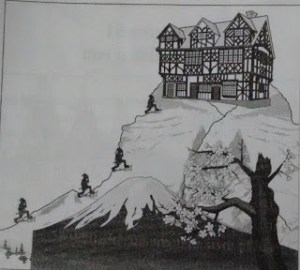 Som was posted as a Deputy Commissioner District Nainital of Uttaranchal. Som possessed designing. His aim was to create attractive tourist places in Nainital to give attraction to domestics as well as foreign tourists. He knew that Nainital was already a tourists place. He wanted to increase tourists and the source of income for newly formed State. During his inspection of various places of Nainital , he observed a steep rock with good surroundings. He made up his mind to construct a beautiful sung retreat over the rock and beautify the base. He submitted his plan to State Government justifying the necessity, along with design of sung retreat , rods , necessity, along with design of sung retreat , roads, details of stairs right from base up-to the top and requirement to develop the surrounding area.

State Government accepted his proposal  and also sanctioned the work and the necessary funds. Som got the work done on priority . The building facilities over there and the beauty of the surroundings boosted the importance of this familiar tourist place. The sung retreat, so built up came up as a monumental attraction for the tourists. It contained luxurious facilities to the tourists. Ans also it contained luxurious facilities to stay over there. that place became one of the famous tourist places of Uttaranchal. The popularity of that area gave satisfaction to Som as an outcome of his foresight and the planned efforts. That also inspired the state government to buildup similar monuments in its other district headquarters including Chandak and Pithorgarh, which also boosted tourist importance of newly formed Uttaranchal State.

I'm Deepak Tomar. I have completed my M.Tech in Computer Science and now i am working as a Govt. Employee in UP Police, I Love to help others and making friends, you can connect to me on facebook for any help- I will be happy to help you .

No Comment to " PPDT PRACTICE SET STORY 12 : A BUILDING ON TOP OF STEEP ROCK "

Say Thanks by Liking Us-